A Day In the Life of Tawdra Kandle 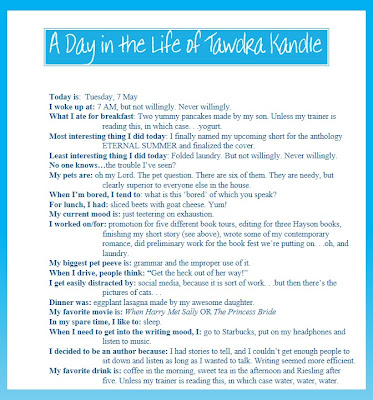 About Tawdra
After years of concentrating on non-fiction, mostly parenting and homeschool related articles, I realized a dream and finished my first full-length novel in 2008.FEARLESS is the first in a series of four young adult urban fiction books.  It will be available through Amazon and Barnes and Noble in December, 2011.In my non-writing hours, I am a mother of five (four biological, one in-law) and a wife of one. I homeschool the two youngest children.Writing, reading and traveling are my passions.  I love and will devour anything by Anne Rice, Diana Gabaldon, Nora Roberts, Janet Evanovitch, Stephen King, Anne Perry, Julia Spencer-Fleming. . .there are too many books and not enough time!
AMAZON: http://www.amazon.com/Tawdra-Kandle/e/B006M7M8HS/ref=ntt_athr_dp_pel_1
Goodreads http://www.goodreads.com/goodreadscomtawdra_kandle
Facebook: https://www.facebook.com/AuthorTawdraKandle
Twitter: https://twitter.com/tawdra
Website: http://tawdrakandle.com
Pinterest: http://pinterest.com/thekingseries/